The Church of St James the Apostle 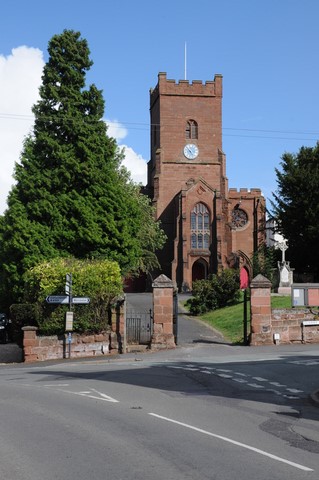 The present church was consecrated in 1837 but the first mention of a resident priest can be found in the Domesday Survey of 1086 which would suggest that there was some form of church in Hartlebury at that time. Bishop Samson (1096–1115) gave the church at Heartlabiri for the use of the Monks of Worcester. The church was rebuilt again in the 13th century, and in the 14th century it was temporarily closed following a murder. Various parts of the church were added through the centuries and in 1818 the rector restored the chancel at his own expense saying that the church was ‘ruinous and unseemly and the most unfitted for its purpose of any within 20 miles’.

The present church was built on the foundations of the 13th century building and its total cost was £7,000, the sandstone being quarried in nearby Quarry Bank and Chadwick. There are portions of the earlier buildings still visible in the fabric of the present church.

The Congregation of St James has published a very informative leaflet giving a detailed history of the building and these leaflets are available in the church.

Prior to 1834 the Churchyard consisted only of the area north and east of the Church and for 600 years the small area was the only burial ground. A drawing of the old Church, which is in the Vestry, shows the road to the Church coming through what is now the garden of Church House. It shows the old cross, complete with the stocks at the base. The Cross was erected in 1666, but it is not known for what purpose or why it was built. It was possibly to commemorate the Great Plague of 1665 or the Great Fire of London in 1666. In 1839 it was pulled down by a farmer's team and broken into pieces.

Today's Churchyards provide tranquillity and interest–often they are rare green spaces in noisy built up areas. It was quite different in the past. The Priest and the people would use the churchyard for many events. On Palm Sunday and Corpus Christi, the Priest and congregation would "process" into the church, much as we do to this day on Palm Sunday. Markets and fairs were held on the grass, while at the Churchyard Cross villagers would gather to hear a preacher. Church 'Ales' were also held. These would have been very much like our garden fetes, when the Churchwardens sold ale. Morris dancers performed and money raised was given to the poor. The poor also received 'doles' handed out in the churchyard. This could have been food, money or clothing left by a pious citizen on his or her deathbed. Villagers also used the grass for archery practice, wrestling and other sports, even cockpits have been found. The churchyard seems to have been used rather like a village green.

In St. James Churchyard are the graves of five Bishops of Worcester: two are related–father and son Bishops Perowne, Bishop Carr, Bishop Pepys, cousin of diarist Samuel, and Bishop Hurd. Bishop Hurd built the Hurd Library at Hartlebury Castle. The oldest gravestones, at the east end of the church, date from the 16th century. They bear archaic designs, which are the subject of discussion. What the carvings represent is uncertain, but it is thought they could represent bags of coins, angels pulling aside curtains, sheaves of corn, or as has recently been suggested, the sands of time! High above these graves, carved into a small fragment of the medieval church wall is a head. To the north of the graveyard are two Victorian Iron 'Gravestones'–possibly commemorating an 'iron master and his wife'. Unfortunately, both are now unreadable due to the effects of severe rusting. On the north side just to the left of the entrance to the Church stands a memorial to Edward James Gibbons–an officer who died on his way to fight in the Boer War. Close to the Village War Memorial is the grave of Private J. Massey who died on 3rd February 1917 from wounds sustained at the front in the First World War.