Hartlebury In The Domesday Book 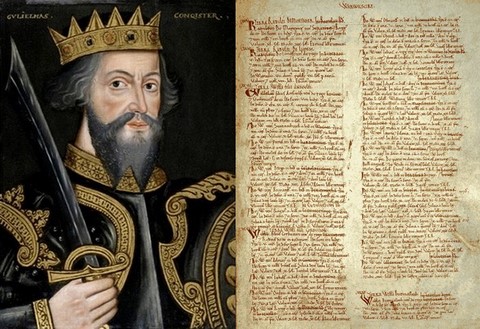 For most places in England, the first accessible description is found in the Domesday Book: for some, there may be an Anglo-Saxon Charter, occasionally with the boundaries described, but these, for Worcestershire, will be found in the cathedral library, and they will be in Anglo-Saxon! They are not easy to understand.
The Domesday Book was produced for William the Conqueror. Having won the Battle of Hastings in 1066, and then occupied the whole of England, William governed the country by giving large estates to his most trusted followers, who were called tenants-in-chief, holding lands directly from the King. To prevent any tenant-in-chief from being tempted into rebellion these estates were generally scattered in different hundreds, different counties and different regions. By 1085 the question of who owned what and where and under what terms must have been confusing. Some tenants-in-chief had died. New ones had been admitted to parts or all of their predecessors' estates. Some barons, by a variety of dubious procedures, had appropriated the lands of others. This was especially true of the Sheriff of Worcestershire, Urse d' Abitot, who appears time after time in the county having helped himself to a few acres here and a small estate there. He became a major landowner by 1085. William also wanted to discover how much taxation he could expect from his newly won land. So Domesday Book was a tax book and a land record and a record of who owned what.

A committee of three or four government officials visited each county to collect the answers to a series of previously circulated questions. Each delegation had at least one senior churchman who would be expected to write down the answers. The odd way in which the village names were recorded in Domesday may, in part, be explained by a Bishop, whose native language was Norman-French, trying to write down a Latin version of a name which he heard from an Anglo-Saxon speaker.

Lands of the Cathedral Church of Worcester 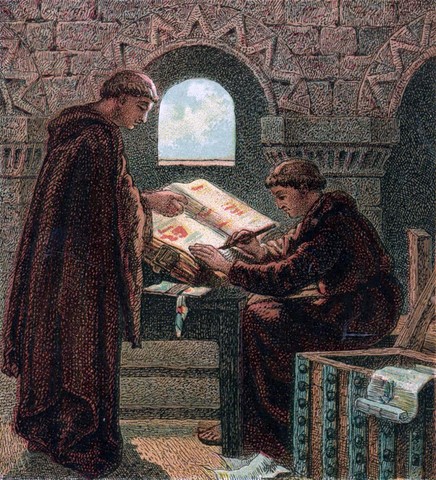 The same church holds Hartlebury with 6 berewicks (attached areas). There are 20 hides and in the demesne (the bishop's estate) 4 ploughs and 24 villeins and 3 bordars and a priest. Between them all they have 21 ploughs. There are 12 slaves and 3 female slaves and 2 mills which pay 4 shillings and 10 summae of corn. There is a woodland 1 league long and half a league wide and in Droitwich 5 houses pay 5 mittae of salt. In the time of King Edward it was worth £16: now it is worth £13:10:00.

So Hartlebury, nine hundred years ago, was in a part of Worcestershire called Cresslow Hundred, an area of land in theory of 100 hides, whose 'capital' was at a place called Cresslow, the situation of which is unknown. Hartlebury was part of a huge estate that had been given over the years to the abbey church and cathedral of Worcester. Hartlebury's landlord in 1086 was Bishop Wulfstan, who was the last Anglo-Saxon bishop in the English Church, soon to be canonised. Hartlebury was a manor: it may have been a nucleated village or a scattered woodland settlement; it had six hamlets associated with it. Unfortunately their names are not recorded. These satellite settlements attached to a manor are common in this area of the county. Bromsgrove had 18: Kidderminster 16 and Chaddesley Corbett 8.

The manor was a valuable one, assessed at 20 hides. A hide seems to have been an artificial unit of valuation and liability for tax. It was common for the church lands of Worcestershire to be assessed in multiples of 5 hides. Because the Lord of Hartlebury was a monk-bishop living at Worcester, not Hartlebury, when he was not travelling on church or royal business, the population consisted almost entirely of agricultural labourers, villeins, a lower class of bordars, and a sizeable group of male and female slaves. One might have expected a steward of the landlord to organise production especially on the demesne or bishop's estate - but no steward is mentioned. There is a priest, which almost certainly means that Hartlebury had a church in 1086. If so it was probably made of wood. The mills would have been water mills grinding corn, for windmills were not invented until the 12th century. The woodland at Hartlebury is typical of many Worcestershire manors: a league is normally reckoned to be 2 miles. It is highly unlikely that the manor had a neat rectangle of trees 2 miles long and 1 mile wide. It is not known how woodland was measured. A large number of Worcestershire manors – and some much farther afield – had interests in Droitwich, which produced valuable salt. It looks as if five Hartlebarians lived in Droitwich producing salt and recognised their responsibilities to the home manor by each providing a "mittae" of salt each year.

The Domesday surveyors were supposed to record a valuation of the manor for the time of King Edward the Confessor (1043–1066), for 1066 and for 1085. In Worcestershire, it is rare for the figure for 1066 to be recorded. In the reign of King Edward, Hartlebury was a valuable manor being worth £16. This had declined to £13:10:00 by 1086. It is not clear why. Hartlebury was not alone. A significant number of local manors had also declined in value. This may be the result of the dislocation caused by the Norman Conquest, but it seems unlikely. Hartlebury seems entirely unaffected by the events of 1066 and after. The landowner remained the Church of Worcester. The bishop in 1086 as in 1066 was the Anglo-Saxon Wulfstan. No Norman is recorded as living in Hartlebury. So the cause of the decline in value of the manor, and so many of its neighbours, must be looked for elsewhere — bad weather? Disease? Disorder? Raids from Wales? It is likely to remain unknown.

Domesday tells us little more. It does not record the agricultural system practised in Hartlebury: it has nothing to say about any buildings, but it does give an idea of its population. The surveyors were interested only in men - so women and children go unrecorded. Hartlebury had 24 villeins and 3 bordars – 27 peasants, assumed to have wives and families. It is usually accepted that the family factor be 5. So 27 x 5 gives a population of 135. There is a priest, presumed celibate: 136. There are 15 slaves who may also have families, though it may be that the 3 female slaves were married to the male slaves. I have guessed that there may have been 44 people without liberty at Hartlebury. This gives a total of 136 + 44 = 180.

There is no way of checking the accuracy of this census. Domesday was a land and tax record not a count of population. All we may safely conclude is that, of its neighbours, Hartlebury was second only to Chaddesley Corbett, which using the same calculating method, had a population of over 100.

There are numerous books on the Domesday Book. Members of Hartlebury History Society may find particularly interesting the Worcestershire chapter in H. C. Darby 'The Domesday Geography of Middle England' or, even better, the Alecto edition of 'Domesday for Worcestershire' published in 1986 – three volumes, one general, one specifically on Worcestershire and lastly a photographic colour record of the Book itself. They should be available in the County Library or at the Record Office.

Hundred of Cresslow in Open Domesday