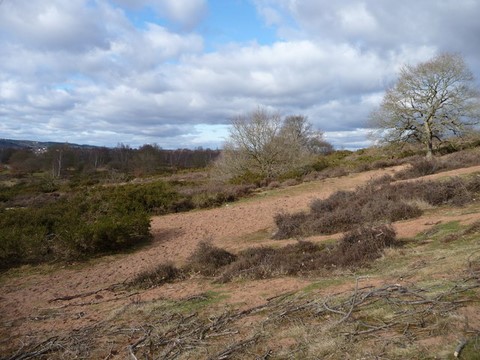 Hartlebury Common is now about only one third of its pre-enclosure size. It was only after 1821 that the top two thirds of what used to be called Hartlebury Heath were enclosed and only the lower third left as common land. It is generally understood that it continued along the ridge above Wilden Lane to Hoo Brook.

In the Medieval period, and possibly earlier, the owner of common land was the lord of the manor in which the common lay–in the case of Hartlebury, the Bishop of Worcester. Ownership was then passed to his legal descendant down the centuries.

The right to free access for those holding common rights meant that the owner was prevented by law from erecting fences, barriers or buildings. At Hartlebury, others did encroach; at the lower half of the common there are several houses and plots carved out of common land–these may have originated as squatters cottages.

In the 18th century Hartlebury Common was described as being 'A sandy, unprofitable heath with only a few lonely cottages exhibiting a picture of desolation and poverty'. It was thought so worthless that it was not enclosed in the Enclosure Acts and Awards of 1815 and 1821. Two centuries later the common is considered to be remarkable, certainly in terms of botanical rarities and especially from a natural history point of view. It has over 220 acres and includes areas of fine windblown sand, a bog—which is the most important in the West Midlands—and various pools all within close proximity to each other.

The common’s importance is in no small measure due to the use to which man has put it.

The Rush Pool dates back to the last Ice Age. Its existence is due to an underlying clay lens which retains water above it in an otherwise dry, sandy area. The peat deposits in the pool are very thick. A fallen pine was found underneath the peat layer and this helps to date the beginning of the peat accumulation; a radio-carbon date was obtained from the sample of the trunk giving an age of 10,000 years. A peat core was taken from the Rush pool with vegetation succession determined from 10,000 years ago. From this date the pollen indicates a beech and hazel woodland with possible open areas. From the Bronze Age to the Iron Age (roughly 1,000BC up to the Roman Period) a sharp rise in grass pollen is discernible which indicates that open areas or clearings were made in the woodland cover.

The first written reference to Hartlebury Heath appears in 1299 and is contained in the Red Book of Worcester which is a survey of the Bishops’ manors in the 12th and 13th centuries. There are references to a 'Thomas on the Hethe' who had one quarter of a virgate (a measure of land of usually about 8 acres) … with two assorts by service 3s 2p per year. For work and custom usually 6d.

The fishpond could be an early reference to Hillditch Pool. Indeed the Bishop is recorded as having 'land near the coney warren which stretches to the fishpond' The fishpond may have been the bog or Rush Pool but neither is thought to have had a permanent level of water sufficient for a fishpond. Thomas is referred to on two separate occasions in the Bishop’s Survey. The survey states that he had to hoe for one day with one man and had to produce three saws in autumn with one man. Thomas was of villain status and the 'one man' probably refers to a servant. As a villain, Thomas was bound to perform certain services for the Lord of the Manor – i.e. the Bishop. Whether he cleared parts of Hartlebury Heath for arable holdings is a matter of speculation.

The Survey provides a glimpse into one of the Heath’s uses–allowing from the Heath materials, for example shrubs, taken for fuel at 10 shillings per year.

There was also a rabbit warren on the heath in the 13th century because in 1288 it is stated; 'No estimate is made of the profits from the coney warren and the fishpond'.

There is clear evidence that both the present common and parts of its former extent were managed for rabbits from the 17th century onwards. The presence of a manged warren indicates the presence of a warrener who would often cultivate areas of scrub to encourage rabbits by providing shelter and food. The first known warrener appears on a lease of December 1692–he was Thomas Lowbridge and he leased the warren from the Bishop of Worcester who owned the common. This 1692 lease mentions a cottage on the warren and this is probably where Cook’s Nursery now stands on the south-west side of the common. 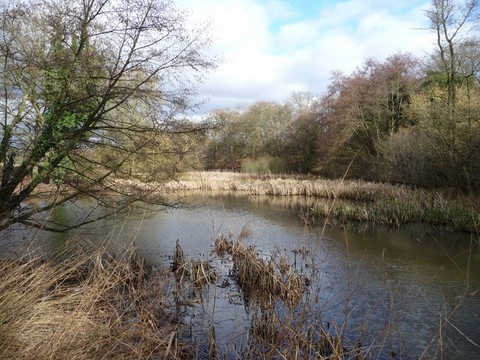 The fishpond could be an early reference to Hillditch Pool. Indeed the Bishop is recorded as having ‘land near the coney warren which stretches to the fishpond’ The fishpond may have been the bog or Rush Pool but neither is thought to have had a permanent level of water sufficient for a fishpond. In 1299 there is reference to a marl pit and the location of this pit equates with Hillditch Pool as the field name of 'Cheesehouse' given in the 1299 survey still survives in the field names surrounding the pool. The pool may then have been formed by digging for marl which went below the water table, thus creating a permanent area of standing water.

The Black Death of the mid-14th century hit the manor of Hartlebury hard, leaving few survivors and so less use was made of the heath by those holding common rights. Only 100 years later, in the mid-15th century the population of the area had risen sufficiently that regulation of numbers of animals grazed by those holding common rights had to be implemented. In 1479 a person holding one yardland (about 30 acres) was allowed to grow 60 sheep on the heath. By 1504, 60 sheep were still allowed together with 12 pigs and 12 draught horses. In 1539 only 12 sheep were allowed per yardlander. Sheep are generally harmless grazers as long as the numbers are not too high; pigs and horses are more detrimental because they tear at vegetation, often uprooting more delicate plants. It is to our Tudor ancestors’ credit that the regulation of grazing was applied to preserve a valuable resource to the less affluent people of the manor.

There is evidence of two rope-walks in the Cook’s Nursery Area. The date of these walks is not certain, but almost certainly of 17th century origin, at least in view that hemp was recorded as grown in 1692. Retting was the first step in the production of rope: the cut hemp plant was tied into bundles and placed in water for up to two weeks so that useable fibres would be separated through decomposition, this apparently gave off a dreadful smell. It is likely that the Bog or Rush Pool was used for this. After retting the fibres were cleaned and straightened and were then spun into ropes along the walks. At the wide end there would be a wheel turned by one person where the fibres were attached, another person with the fibres wrapped around his or her waist would walk backwards along the walk drawing the fibres out.

In 1840 there is a reference that clay was dug from under the moss to make crucibles for smelting at the forges that were worked near Titton Brook. Rod mills, where straight and slender bars of iron were manufactured and are recorded in the 17th century at Upper and Lower Mitton. These processes needed large quantities of sand to make the connections where the iron was led out of the furnace into casting moulds.

In the 19th century a rifle range was set up on the common by the Stourport Rifle Corps, a volunteer force formed in 1859. The possibility of war with France caused the government to set up Volunteer Corps throughout the country. The officers of the Corps were all local factory owners–Messrs Baldwin, Harrison and Worth. Manoeuvres, exercises and camps certainly took place on the Common for some years. From 1866 the Worcestershire County Rifle Association also had use of the ranges. The range had the butts on the steep western slope of the hill. Long range firing points required shots to pass over the main Stourport turnpike, now the A4025, flags and a bugler were placed on the road to give warning to cease firing when travellers appeared. There seems to have been some danger to the general public, one report tells of firing having to be suspended because of cannon balls passing dangerously close to a labourer’s cottage half a mile away. In 1872 a miller complained that a cannon ball came over the hill and nearly killed him and his horse, possibly the miller at Titton Mill. The introduction of the more powerful Lee-Metford rifle to the volunteers in 1898 saw the decline of the ranges and by 1899 they were closed.

Gipsies lived for many years on the common, a change in the bye-laws in 1908 governing the use of the common obliged them to move to other sites. The gipsy evangelist, Wesley Baker, set up the 'Gipsy Mission Tent' at the top of the common near to the turning into Wilden Top Road. In 1914 John Loveridge erected another chapel, this time timber built and attractively furnished, with a bell from old Mitton Church to call the congregation to prayer. Sadly, this has long been demolished.

Now that the common has SSSI status its future seems assured, we now have a wonderful amenity for all; to walk the dog, ride a horse or simply just to enjoy.